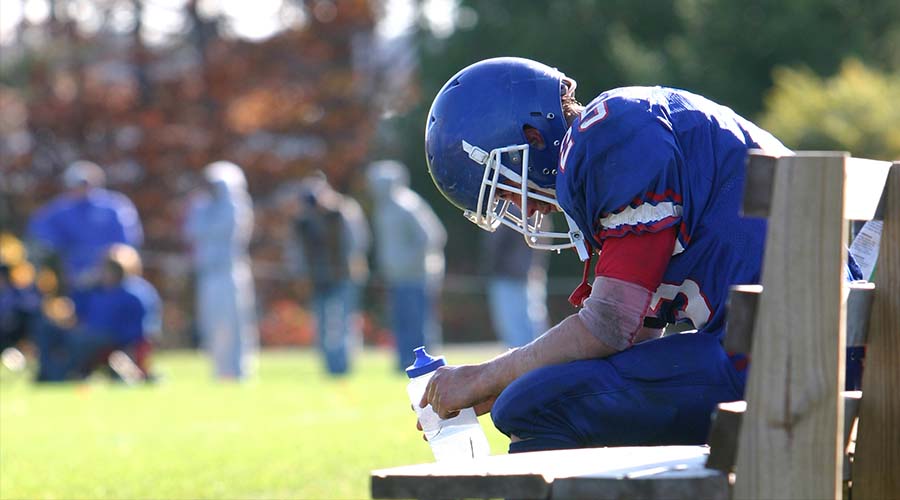 Second in the series. Read Part One, Football Hero Here

Brock Harmon finally hung up the cleats after a remarkable 15 year NFL career. It was time. His kids were in junior high, his wife was over being a widow for nine months out of the year and his body was talking to him. Brock had a different and more important task than playing football as his vocation now.

They had gone to the State finals in Harmon’s senior year of high school  and oh-so-narrowly had come up short as the game clock expired. They were matched against a high-powered Catholic school that had a football program that rivaled many small colleges. Brock’s Spartans were smaller, slower and far less talented than the Golden Knights, who had no less than one-third of their starters nationally-ranked in the college recruiting publications. Harmon was the only legitimate D-1 prospect on his team, but the courage, heart and will of his teammates kept them at the cusp of victory until the final gun. So impressed was the Golden Knight’s coach that he asked permission of Rudolph Vincente, the Spartan’s coach, to address them in their locker room after the game.

The opposing coach entered a somber locker room with very little chatter and some muffled sniffles as he stood around them. “Gentlemen, while it’s good sportsmanship to pat your opponent on the back and say “good game” as you leave the field, that won’t cut it tonight. The papers all said that we are bigger, faster and have more talent than your team and we were favored by 3 touchdowns. I’ll tell you straight up that I’m more proud of my guys than ever for meeting the challenge we did tonight. I have never witnessed more grit, determination and heart at any level of sport and I am humbled to be in the presence of Coach Vincente’s team. Losing a game hurts for the moment, but being a loser lasts a lifetime. Every one of you guys is a winner of the highest rank, and no one can ever take that from you. You deserve the State Championship as much as we do, and no man on my squad will tell it differently. You got our very best effort, because that’s what it took to stay on the field with you. If it’s alright with you, coach, I’d like the opportunity to shake the hands of each of these successful young men.”

Brock Harmon was heavily recruited after his final game, but settled on Texas Tech. They ran a pro-style offense with lots of shotgun and check-down reads which fit Brock’s style and lack of blazing foot speed well. He had a decent college career, took care of himself, steered relatively clear of trouble and got drafted in the 3rd round. Brock found himself, like many aspiring quarterbacks, in a journeyman back-up role, generally playing enough to keep him active as trade bait. When he finally got his shot as a starter, he was playing for a Cleveland team that had middling success, but had enough talent to build on. Long story short, with Brock at the helm, the Browns went to 2 Super Bowls, winning one and Brock made all-pro 8 of his 15 years in the league.

The people in Cleveland were some of the nicest people he’d ever been around, Brock got a nice gig as a network football analyst and he and Terri were living very comfortably in an area where they wanted to raise their kids.

Coach Vinny, the Spartan coach, had retired after 35 years as coach and teacher, and most of his players managed to stay in touch with him, including Brock. Coach had called Brock one year when a shoulder injury had cut his season short and Coach knew that the situation was killing Brock. They spoke for an hour and one half about family, his parents, his kids and the people in Cleveland. Brock was so at ease talking to Coach that he didn’t realize until he had hung up that they never talked about football. Coach did mention that he was becoming increasingly concerned about the pitfalls of increased substance abuse among young people and, while he kept tight rein on young men when they played for him, there was an entire generation that seemed to be at greater risk than ever before. Brock was a young dad, and Coach’s words kept echoing in his head as he thought about a post-career strategy of action.

Brock was in the announcer’s booth at Three Rivers Stadium to do the Miami-Pittsburgh game, when an overstuffed man in an ochre colored blazer entered the booth. Suddenly, Brock realized that all of his colleagues, his wife Terri and all of the network cameras were focused on him….he was chosen for induction to the Pro Football Hall of Fame. After the shock died down and the handshakes and hugs gave way to the action down on the field, Brock knew there was one voice he wanted to hear. “Coach Vinny?  It’s me, Brock.” I know, son…I actually own a television, believe it or not.”  After about a 20 minute chat, it was time to hang up, and Coach said, “I love you”. Brock answered with the only acceptable response for a Spartan; “I know, Coach.”

Chris Berman was up on the dais in Canton, warming up the crowd. The surviving members of the HOF, all in their gold jackets ambled around, laughing, hugging and walking with pronounced limps. Finally, it was time for the presentations. Coach Vinny never liked to fly and was going to watch it from his California home on TV, but Brock and his old high school teammates wouldn’t allow that. It was a long train trip out from the Coast, and it’s a fair bet that some of Coach’s old rules about drinking by his athletes went by the wayside. They were seated in the middle section of the crowd. People had come from all over to see their heroes inducted, wearing team jerseys and consuming plenty of the local breweries’ output. It wasn’t a far trip for Cleveland fans, so Brock’s Browns were very well represented.

Brock had always been kind of the team cut-up, and could have had a decent gig doing stand-up. He told a few anecdotes, got some yuks, thanked his parents, family, coaches, teammates, etc., all pretty pro forma for a HOF induction. He paused, cleared his throat and collected himself.

“I’m grateful for so many people in my life, but I’m up here before you because of one person, and maybe not for the reasons you might think. I’ve never told this story publicly, and the only ones who know it are sitting in the middle section. You see, sometimes someone so seemingly unremarkable becomes the pivot point in your life. That person, parent, teacher, coach or whomever, can lecture and demonstrate, but character is not taught, it’s revealed. The discipline to accept that responsibility is a clarifying moment that the right person can guide you to.”

By now, everyone is shifting uncomfortably in their seats. Is this some new-age bullshit that Brock’s talking about because he got hit in the head too many times, or is there one of his punchlines hiding around the corner?

Brock continued: “Coach cared more about me becoming a successful and healthy adult than he did about winning a football game. He taught me about honesty and responsibility. I took him at his word, confessed to breaking a team rule and he sat me on the bench as a result. At that moment, I hated his guts. How fair was that to take away something I cared about more than anything in life?  That week was long and painful, but I felt myself grow and I felt my team around me grow. I had let them down and that would never happen again. I pray now that someone in my children’s lives, ideally in all children’s lives, can reveal to them the character contained within.

“Coach Rudolf Vincente, would you please stand up?”  Coach stood, and his players, Brock’s teammates, linked arms in a row around Coach. “Taylor, come on up”. Junior Taylor, one of Brock’s receivers, came up to the foot of the stage. Brock turned to the Hall of Fame members behind him. “Gentlemen, I’ve never been more proud than this moment, wearing the Hall of Fame jacket and joining your fraternity. I hope you’ll forgive me for what I’m about to do.”  With that, he took off the jacket and gave it to Taylor. “Please give that to the real Hall of Famer”. Taylor walked up to Coach Vinny, slipped the jacket on him and wheeled him around to face the stage. Coach’s eyes were tearing up. Brock continued:  “Ladies and Gentlemen, a true Hall of Fame man to me and to all of the other mentors out there that help guide children to adulthood”.

There was a roaring standing ovation in the audience, among the Hall of Fame alumni and not a dry eye in the State of Ohio. Coach Vinny stood in place, looked up at Brock, and the cameras caught him mouthing the words “I love you”. Brock looked back and said “I know, Coach, I know”.

Brock Harmon started the Rudolph Vincente scholarship fund at his old high school. Every incoming freshman had the opportunity to sign a pledge that they wouldn’t use drugs or alcohol, submit to random confidential drug testing and, if compliance was met, got a $2,500 cash scholarship put in a trust account in his or her name. After the sophomore year, it grew to $5,000 and so on until a $10,000 trust fund was awarded for the successful completion of any student that stayed substance-free through high school. It was so successful that Brock now spent his time raising funds all over the country for schools who wanted to implement the same program.

Coach Vinny passed away. The chapel had to wire the outside for speakers as it seemed that everyone who ever attended that high school came to honor Coach Vinny, whether they played football or not. The scholarships in his name made impacts in the lives of people that would never meet him. What kids came to realize and the idea Brock kept alive was that someone cared enough about them to make sure that they cared about themselves. The Pastor finished Coach Vinny’s service with the words requested by the family. They were simply “I love you”. In unison, the crowd responded “We know, Coach, we know…”